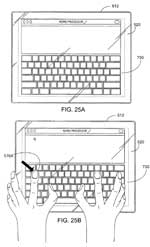 hrmpf.com mentions some new patents Apple applied for that would indcate some kind of Mac OS X based Tablet. The interesting thing is how “gestures” are used to manipulate the data – some of the UI elements include “floating” elements – like an iPod-like wheel popping up on the screen, allowing you to use it like the controls of an iPod. Another interface – turnign the surface of the Tablet into a mixing board. There is also the ever ubiquitous turning half the screen into a laptop keyboard, similar to how some PDAs handle on-screen keyboards. There are also some elements that use multi-fingered gestures, such as sort of a pinching motion to zoom in or zoom out on a map or graphic file.

This will be very interesting to watch – if they put even half the elements they listed into a Tablet, it will make Microsoft’s Tablet OS look…clunky.

This entry was posted in Apple, Rumors. Bookmark the permalink.