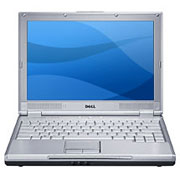 Looks like specifications and high-resolution images of the new Dell XPS M1210 have been released. It’s supposedly slated for a mid-May release. Back at the end of March, when the Samsung Q35 was released, we speculated that we might soon see a Dell Latitude X2 (or whatever it will be called). It looks like this might be in effect the Latitude X1’s replacement, instead of a X2, as the specifications are very similar (and a Samsung ultraportable notebook was the basis for the X1).

The problem with that – while the XPS M1210 shares many of the same internals as the Q35, such as an internal dual-layer optical drive, Intel Core Duo chipset/CPU, same size widescreen display (1280×800), there is one significant difference – the XPS M11210 supposedly has either an NVIDIA 7300 or ATI X1300 graphics chipset.

One thing working against it being an “X2” is the X1 used an Ultra Low Voltage (ULV) Pentium M CPU. Then again, the Samsung Q30, the basis for the X1, used the same CPU (ULV Pentium M), and the Samsung Q35 uses a normal Intel Core Duo. Then again, it’s doubtful that Dell would have four ultraportable notebooks – the current Inspiron 710M and Latitude D410 (with Intel Core replacements for both just over the horizion, an Inspiron 720M and a Latitude D420), and this XPS M1210 would fit in nicely as Dell’s high-end ultraportable.

We’ll keep you posted as we find out more information.

This entry was posted in Announcements, Dell, Rumors. Bookmark the permalink.