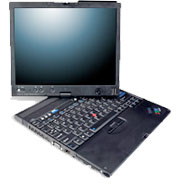 GottaBeMobile.com has clarified that there is not a Intel Core 2 Duo version of the Lenovo ThinkPad X60 Tablet available. For a while the Core 2 Duo options were available on Lenovo’s ThinkPad X60 site.

GottaBeMobile had this to say: Our sources at Lenovo have contacted us tonight and told us that this is apparently a mistake with their website and that there are no Core 2 Duo Thinkpad X60â€™s available as of this moment.

So, obviously there is some confusion going on at Lenovo and we are trying to track it down as best we can. Weâ€™ll update as we find out something concrete but in the meantime, somebodyâ€™s got some spâ€™lainin to do.

I think they were on to something, it’s just a matter of time until the Core 2 Duo ThinkPad X60 Tablets come out – it seems unlikely they would wait on the next generation of Intel CPUs.