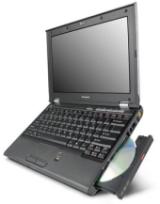 The V200, the sequel to the V100, is an Intel Core 2 Duo-powered laptop (based on Santa Rosa) with a 12.1-inch widescreen display and an internal optical drive. It’s slightly heavier than other laptops in its class, weighing in at around 4.5 pounds with battery and internal drive, but it’s also one of the cheapest in this class.

They gave it high marks, saying Lenovo managed to produce a worthy upgrade to the V100 with the V200.