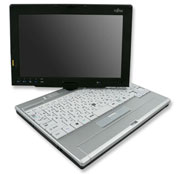 Could it be that Fujitsu’s lineup of 8.9-inch widescreen “convertible” laptops has received an update? The last release was the LifeBook P1610/P1600 in last year.

Unfortunately there’s not much information out on the Fujitsu Japan site, but it does look like the only difference is that it offers 16GB and 32GB Solid State Drives (SSD) as an option, and the battery life looks to be increased out to around 9 hours with the extended battery, running Windows xP (Vista Business is offered as well).

Thanks to tlok for passing this on.

This entry was posted in Announcements, Fujitsu, Tablets. Bookmark the permalink.