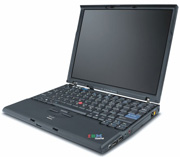 Ted Lynch has published a review at NotebookReview.com about the Lenovo ThinkPad X61s, Lenovo’s smallest/lightest ultraportable laptop (it’s the same as the X61, albeit using a different Intel CPU, one that has less power consumption), based around Intel’s Santa Rosa platform running an Intel Core 2 Duo CPU, with a 12.1-inch screen (which is unfortunately not widescreen).

He comments on the durability, saying:

Overall, the X61s feels rock solid, the fit and finish on it is excellent. There were no gaps or misaligned parts. The base is made of a rugged plastic. The screen cover is mag-alloy and the screen is secured to the base using steel hinges. When pressing on the back of the screen, it doesn’t ripple so much as bend, but nonetheless it looked like it could take a beating.

If you are curious, he posted comparisons (including photos) to the Lenovo ThinkPad R60.