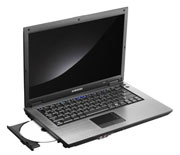 When information started coming out about the Samsung Q70, we initially thought this would be the basis for what became Dell’s 13-inch offering, the Dell XPS M1330, which, even though it has a 13-inch display, turned out to be fairly ultraportable. The XPS M1330 weighs around four pounds with the internal DVD writer, lighter than many laptops with 12-inch displays.

Apparently, that’s not the case, but since we’ve listed the Q70, we are going to go ahead and collect information about it as we come across it. As such, the Q70 is an Intel Core 2 Duo-based, widescreen laptop and you have the option of the dedicated NVIDIA GeForce 8400M graphics chipset (along with 128MB dedicated graphics memory).

First up: TrustedReviews. They compare it to Apple’s MacBook, as well as make a point about portability:

This also gets to the nub of what I see as the main problem of the Q70, that it defies qualification. Itâ€™s not an ultra-portable, and doesnâ€™t quite have the grunt of a desktop replacement. Itâ€™s not as light as the Q45, and is also noticeably thicker measuring 39.2mm compared to the Q45s 36.3mm. Moreover that makes the Q70 a good deal bulkier than the 27.5mm of the MacBook, and even given the Q70 being lighter there is something to be said for having a balance to between weight and thickness.

Ultimately, it does leave you wondering why youâ€™d choose a 13.3in notebook over a smaller 12.1 which has more or less the same features but is lighter and more portable.

Next, John Ratsey’s review at NotebookReview.com – compared to a Samsung Q35, as well as bringing up Dell’s M1330:

If the Dell M1330 had not appeared, then the Q70 would have got a good position relative to the Sony C series on account of similar price, significantly better specification and lighter weight. But with the arrival of the Dell M1330 which can also be configured to a similar specification, Samsung may need to reconsider their pricing.

It’s interesting, because in the past Samsung manufactured laptops for Dell (and may still do so), however the M1330 was at least half a pound lighter than the Q70, and at least on paper, a better deal.

This entry was posted in Dell, Reviews, Samsung. Bookmark the permalink.