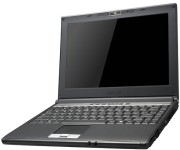 MSI has started to release information on the MSI MSI-1221 (m-Book PR200X) 12.1-inch widescreen ultraportable based on Intel’s Santa Rosa platform. It looks like it’s related to the MSI PR200

Not much is known at this point other than what’s been released, and when (if) it will be available outside of Japan remains to be seen. Pricing is around – $1216 – $1622 USD.