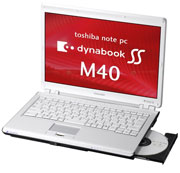 Yesterday, Toshiba announced the new Toshiba Dynabook SS M40. It has a 13.3-inch display which is pushing “ultraportable”, but like the Dell XPS M1330, it’s very lightweight, weighing in at just over 4 pounds (lighter than several 12.1-inch “ultraportables). It’s considered a “professional” or business laptop, unlike the Toshiba Satellite U300 and Satellite U305 (Toshiba’s consumer-oriented laptops with 13.3-inch displays).

It shares a similar styling and name to the Toshiba Dynabook SS RX1, an ultraportable with a 12.1-inch widescreen display, but unlike the SS RX1 which is running an Ultra Low Voltage (ULV) Core 2 Duo CPU from Intel, the SS M40 is running either a 2GHz Celeron 450 or 1.8GHz Intel Core 2 Duo T7100 CPU.

Pricing, availability, and further specifications are unavailable at this time.

This entry was posted in Announcements, Toshiba. Bookmark the permalink.