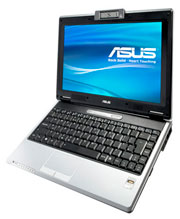 We’ve just added the ASUS F9J to the site. It was announced earlier this year, and is just starting to become widely available. It can be found starting at anywhere from $1250 USD on up to $1500 (check ASUS’ site for retailers for current pricing).

It has a 12.1-inch widescreen display, and has a large number of processors to choose from, from Intel Celeron Ms up to the Intel Core 2 Duo T7600 (2.33GHz, 4MB L2). It maxes out at 2GB of memory. One of the more unique things about the ASUS F9J is the graphics chipset: it has a NVIDIA GeForce Go 7300 with 128MB of dedicated memory. A lot of laptops in this class tend to have the integrated/default graphics chipsets (Intel GMA950, etc. for Intel-based laptops, etc.). This has led ASUSTek to tout this as a gaming, HD video playing ultraportable.

Speaking of HD, going by their website, at some point they will probably be offering BD (Blu-Ray DVD) and HD-DVD as possible optical options.

It weighs in at around 4.2 pounds which is slightly heavier than many in this class, however it does have an internal optical drive, and more importantly, it has the dedicated NVIDIA chipset which can add to the cooling requirements. ASUStek claims that with the 6-cell battery, a four hour battery life is possible.

This entry was posted in Announcements, ASUS, Blu-Ray / HD DVD. Bookmark the permalink.