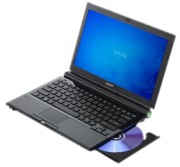 Well, you’re probably getting overloaded with information about the US (possibly North America) release of Sony’s VAIO TZ series, replacing the VAIO TX series as the flagship line of Sony ultraportables, but you’ll find this worth reading, as LAPTOP Magazine has one of the first reviews (if not the first) of the VAIO TZ series in the US. Of course, the TZ series in the US is basically identical to the Sony VAIO TZ90, etc., that has already been released in Japan, but it’s still a good review. The TZ150N they reviewed is the low-end version of Sony’s TZ series.

And yes, Sony did not move up to Intel’s Santa Rosa platform, but they are using the latest Ultra Low Voltage CPUs, and they are using LED Backlighting.

LAPTOP Magazine had an issue with some of the software Sony included:

You might call it executive jewelry. And you’d be right, but the VAIO VGN-TZ150N (which replaces the TX series as Sony’s flagship ultraportable) does much more than make a style statement. This 2.7-pound Vista Business notebook packs in mobile broadband, a webcam, and a DVD burner……. With all of the features stuffed inside this micro machine, one wonders how Sony found the room to cram in so much trial software, or “crapware.”

This entry was posted in LED Backlighting, Reviews, Sony. Bookmark the permalink.