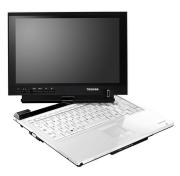 Toshiba has announced that they are shipping the world’s first UWB Wireless Port Replicator. It’s going to be for the Toshiba Portege R400, an ultraportable “convertible” (can switch between a laptop or Tablet PC form factor) laptop.

If you are looking to try out a UWB wireless, with only USB peripherals attached (printers, scanners, mice, etc.), you can check out the D-Link DUB 9240 for $120, which works up to 30 feet away and allows you to connect four USB devices to the wireless hub. You plug in a USB adapter to your laptop, which then makes a wireless connection to the DUB 9240. It doesn’t do video or ethernet or audio, but it also works on just about any current laptop with USB 2.0.