Reviews of the Panasonic ToughBook CF-30 (aka toughbook 30) 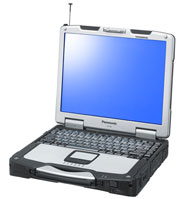 Okay, the Panasonic ToughBook CF-30 (or toughbook 30, as Panasonic seems to be slowly renaming their toughbook lineup), it’s not exactly ultraportable, at a whopping 8.4 pounds, with a 13.3″ non-widescreen (toughscreen optional) display, while there are several 13.3″ widescreen laptops popping up at four pounds and under. Even though it just started becoming available at the end of last year/earlier this year, because of the amount of work that goes into designing and testing these kinds of laptops, they are usually a generation behind on the current CPU/chipset technology – the ToughBook 30 is no exception, it’s got a 1.66GHz Intel Core Duo Low Voltage L2400 CPU. Keep in mind this has met the MIL-STD-810F standards for toughness/durability, including moisture- and dust-resistant LCD, keyboard and touchpad, as well as ports/connectors that are sealed with removable covers. The hard drive is shock-mounted (and removable), as is the laptop, which is drop and vibration resistant. Generally, the people who need these, really need them.

It’s also one of only a handful of laptops in the 10″ – 13″ range that are “semi-rugged” (or in this case, “fully rugged”), and as such we are including it. This month, there have been a couple of reviews of the Panasonic ToughBook 30.

First up: TrustedReviews (with a video you have to see):

If youâ€™ve been reading TrustedReviews for a while, you will probably have seen some of the previous ToughBook reviews and know that I have a tendency to put them through the grinder. I generally take the machines out to the car park and drop them on the ground, stand on them and pour water all over them while theyâ€™re switched on. To date, every ToughBook has survived the abuse Iâ€™ve thrown at it, so this time I decided to turn things up a notch.

Having been to Japan and seen the ToughBooks being tested, I know that they are dropped from a metre high from multiple angles, but that doesnâ€™t stop me wanting to do the same myself â€“ just to be sure. As you can see from the video, the CF-30 didnâ€™t break a sweat being dropped onto the floor. Likewise, the CF-30 didnâ€™t seem in the slightest bit worried when Andy ran up and jumped on its lid â€“ in both instances, opening the lid revealed that the machine was still running Windows XP and was oblivious to the punishment it had suffered.

Next I opened up the CF-30, switched it on and proceeded to pour a jug of water all over it. The CF-30 isnâ€™t just splash proof, itâ€™s pretty much waterproof â€“ as long as youâ€™re not planning on using it on a diving expedition! This is why The AA equips all its breakdown engineers with ToughBooks, since they can still use them in the pouring rain (which is often the case in the UK), without worrying about them blowing up.

The second review, from a few weeks ago, ZDNet.co.uk

On the outside, the Toughbook CF-30 looks less like a notebook computer than some sort of case for hazardous material. Its integrated carrying handle helps to create the illusion. Open the clamshell, and things start to look a bit more familiar.

The 13.3in. screen has a somewhat old-fashioned XGA (1024 by 768 pixel) resolution rather than the wide aspect ratio that’s now common on both business and consumer notebooks. The display is bright and designed to be read outdoors in direct sunlight. It’s also touch sensitive, with passive touch-screen electronics that allow you to use a fingertip as well as the provided stylus, which stows neatly in the carrying handle. The idea is to allow the CF-30 to be used in a range of unusual environments where using the keyboard and touchpad is not feasible. Imagine dust, dirt and mud, for example, or situations where the user is wearing thick gloves.

This entry was posted in Panasonic, Reviews, Rugged, Tablets. Bookmark the permalink.