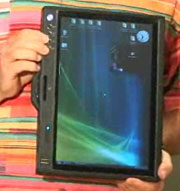 Well, it would appear that Dell is getting pretty bold about their upcoming Dell Tablet PC, aka the Dell Latitude XT. You may or may not have seen the video (a half dozen different people emailed it to us saturday and sunday), but to sum it up, it starts out with the comment: If you had a Tablet PC that drove you crazy…what would you do with it, followed by a video of a Toshiba Portege Tablet PC being cut up with a band saw, followed by the words You’ve shown us. We listened. The frustration ends when the XT arrives. Coming Soon.

My take, I agree with James Kendrick, I’d rather see a video showing off the Dell Latitude XT, and its features, and why Dell thinks it’s better than the competition, rather than a bunch of trash talking. They claim to have listened to us in the video, but they didn’t show us that they listened to us, they showed us a video of a Tablet PC from the competition being cut up.

Is this something we are going to get every few days, is tomorrow going to be a video of a Fujitsu or an HP Tablet PC being cut up? Give me specifications, give me a better looking video with lots of nice pictures.

Reactions among some of the mobile community:
– GottaBeMobile.com (one of the first to write about it)
– jkOnTheRun
– Mobility Site
– StudentTabletPC.com

The video in question:


This entry was posted in Dell, News, Tablets. Bookmark the permalink.