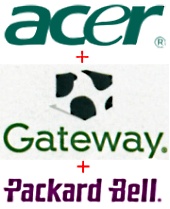 Get your flowcharts out – well, not really, but this one will surprise you. It’s one of the biggest stories to hit the laptop and Tablet PC market in quite a while.

First, Gateway is going to acquire Packard Bell. Quote: Gateway intends to exercise its Right of First Refusal to acquire from Lap Shun (John) Hui, all of the shares of PB Holding Company, S.ar.l, the parent company for Packard Bell BV – a leading European PC vendor based in France. Yes, Packard Bell is still around, albeit mainly in Europe (at one time they were one of the biggest, and sometimes biggest, players in the PC market in North America).

No surprise – Gateway gets access to some markets and products that maybe they didn’t cover too much in the past.

Here’s the kicker, it was just announced this morning that Acer is buying Gateway for $710 million. That’s huge, not because of the money either. There were will be overlap in the ultraportable segment for both companies, although most of Gateway’s ultraportables, such as the E-100M / E-100Mb, E-155C, and NX100X were geared towards industrial, education, medical, and government markets.

On the other hand, Acer has the TravelMate 3040 and TravelMate 6292, along with the Ferrari 1000 / 1004WTMi which are primarily aimed at consumer and business users. That’s basically four 12″ laptops and one 12″ Tablet PC / Laptop that overlap.

What’s going to happen to the product lines? Read the excerpt below for more details:

Acer Inc. (TWSE:2353), one of the world’s leading branded PC vendors, announced today it has entered into a definitive agreement to acquire Gateway, Inc. (NYSE: GTW). Gateway is the fourth largest PC company in the US and a leading retail PC provider. The combination will create a multi-branded PC-company with over US$15 billion in revenues and shipments in excess of 20 million PC units per year.

Under the terms of the agreement, Acer will commence a cash tender offer to purchase all the outstanding shares of Gateway for $1.90 per share, which represents total equity value consideration of approximately $710 million. The acquisition has been unanimously approved by the boards of directors of both Gateway and Acer and is subject to standard closing conditions, including approval under Hart Scott Rodino, Exon Florio and similar laws outside the U.S. The acquisition is expected to close by December 2007.

“This strategic transaction is an important milestone in Acer’s long history” said J.T. Wang, Chairman of Acer. “The acquisition of Gateway and its strong brand immediately completes Acer’s global footprint, by strengthening our US presence. This will be an excellent addition to Acer’s already strong positions in Europe and Asia. Upon acquiring Gateway, we will further solidify our position as number three PC vendor globally.”

Gianfranco Lanci, President of Acer, added, “Both Acer’s and Gateway’s geographical presences and product positioning are highly complementary. We believe that our combined scale will lead to significant efficiencies. Gateway has built one of the industry’s most powerful and unique brands and with this acquisition, we will have the opportunity to implement an effective multi-brand strategy and cover all the major market segments. In time, we intend to actively manage our brand portfolio and differentiate our brands to address different consumer segments. We are also acquiring a world-class team and Gateway’s employees will be critical to our combined success.”

It almost sounds like they may go the way of Lenovo’s acquisition of IBM’s PC Business, where Lenovo has kept the ThinkPad branding for its business line, and maintain the Gateway and Acer brands for separate markets (no word on Packard Bell’s laptop lines in Europe).

This entry was posted in Acer, Announcements, Gateway. Bookmark the permalink.