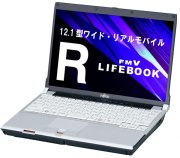 The Fujitsu LifeBook P8010 has shown up at the FCC (thanks Niko), giving us a lot more specifications (the user manual is one of the documents submitted). Of course, the specifications are subject to change, but this fits with Fujitsu wanting to roll this laptop out to North American users sometime in February, 2008. The P8010 is practically identical to the Fujitsu LOOX R, so it’s probably the North American/US version of the LOOX R (pictured to the right).

It’s the replacement for the Fujitsu LifeBook P7230 and is not based on Intel’s Penryn CPUs, as had been reported earlier. Unlike the P7230, which has a 10″ display, the P8010 has instead received a larger screen (12″ LED backlit), and yet as the Fujitsu Press Release from a few weeks ago points out, it’s kept a similar footprint. They’ve somehow managed to keep the weight down to around 2.7 pounds (1.22kg), while keeping an internal optical drive and an estimated battery life of up to 9 hours.

The battery life can be explained with the choice of CPUs – the P8010 is using an Intel Core 2 Duo SL7100 (Ultra Low Voltage or Low Voltage) running at 1.2GHz. That could also explain the light weight, since it could possibly be cooled with a passive cooling system.