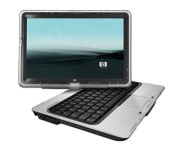 Update: February 3, 2008
For a second week in a row, HP still has a few 12.1″ Touchscreen/Convertible Tablet PCs (part of the HP Pavilion TX1000Z series), that are being replaced by the
HP Pavilion tx2000z series. HP is probably looking to clear existing inventories and February 3, 2008, dropped the price about $50 on the TX1110US (now it’s running around %33 off original price). They’ve also added additional models with deep discounts.

This entry was posted in HP/Compaq, Sales and Deals, Tablets, Toshiba. Bookmark the permalink.