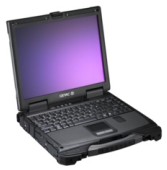 Last week, LAPTOP Magazine announced a new, 13.3″ rugged notebook, the GETAC B300. At 7.7 pounds, it’s not exactly an ultraportable laptop, but considering what you get for something in that size, it’s going to generate a lot of interest in certain fields (military, law enforcement, outdoor, construction, etc.). It’s based on a 1.6GHz Intel Core 2 Duo. It’s not a replacement for the Getac V100 as the V100 features a touchscreen (and it was only announced in May of 2007).

Full details have pricing haven’t been announced, LAPTOP Magazine mentions March 2008, and GETAC is participating in the “2008 ESRI Worldwide BPC” which is taking place March 15-18, 2008.

This entry was posted in Announcements, Other Mfrs, Rugged. Bookmark the permalink.