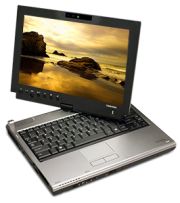 The first videos and reviews of the Toshiba Portege M700 are starting to come out. The M700 is replacing the Toshiba M400. Some of the changes between the two include an upgrade in CPUs and chipsets (with much better graphics performance), and an upgrade in the display to a widescreen.

Over at GottaBeMobile, they’ve posted an unboxing video of the M700, and in their forums, users have started posting their
first impressions.

Toshiba touts the M700 as being able to use some Toshiba M400 accessories, and user “GoodThings2Life” mentions being able to use their M400 slice battery (which attaches to the bottom) to get up to around six hours of battery life (without – 3.5 – 4.5 hours depending on power scheme).

Putting aside default software issues (which they mention can be easily fixed), “GoodThings2Life” states that the M700 is by far one of the best tablets Iâ€™ve used.

This entry was posted in Reviews - Video, Tablets, Toshiba. Bookmark the permalink.