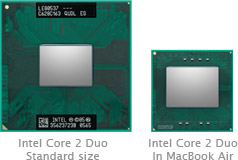 Could the custom CPU that Intel cooked up for Apple’s MacBook Air find its way into other, non-Apple, laptops? Say it ain’t so! But it maybe, at least according to PC Advisor:

Two PC makers will use the miniaturised Intel Core 2 Duo processors used by Apple in MacBook Air, said a source familiar with Intel’s plans. Windows systems powered by the chips will be released soon, the source said.

This is, of course, a rumor, until we have named sources/press releases/etc., but it makes sense. I can’t imagine that Apple would fully fund Intel’s development of the tiny Intel Core 2 Duo (which by the way is not an Ultra Low Voltage (ULV) CPU) since it would drive the MacBook Air’s price up substantially (on top of the already expensive Solid State Drive).

The CPU used in the MacBook Air is a full Merom-based Core 2 Duo with an 800MHz front side bus (FSB) and 4MB of L2 Cache, with the only differences between that CPU and regular Merom-based C2D CPUs being a slower speed and lower voltage (which is still higher than Intel’s Low Voltage lineup).

Chances are, Apple has a binding agreement with Intel to be the sole user of this custom CPU for a certain amount of time.