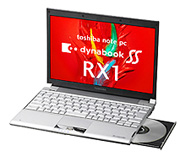 Looks like Toshiba is one of the first PC makers to ship a laptop with a 128GB Solid State Drive (SSD). Solid State Drives are flash-memory based and have no moving parts – in some aspects they can speed up a notebook considerably. In addition, because of the lack of moving parts, they are more durable and require less energy, meaning an increase in battery life.

Which one is it? The 12.1″ widescreen Toshiba Dynabook SS RX1 is the first from Toshiba to roll out with the new 128GB SSD.

Unfortunately, it’s a Japan-only model for now (and Dynamism doesn’t appear to be carrying it).

You can view the Toshiba product page here (it’s in Japanese). The 64GB Solid State version was running around $3000 USD, so this will probably push it up substantially.

Thanks to Ed R. for the tip.