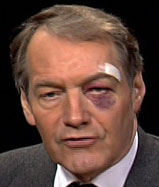 See that battered face to the right? That’s Charlie Rose. Charlie Rose is a journalist, correspondent, and hosts the Charlie Rose show on PBS, an interview-style show. I would say he is very well known.

It turns out, he happens to really like his MacBook Air.

He likes it enough that he’ll do that to his face rather than let any harm come to his new MacBook Air. Banging himself up isn’t enough of a reason to cancel any of his shows either, apparently, so what you see on the right is what viewers of the Charlie Rose show saw on his show this week.

Michael Arrington over at TechCrunch found out what happened: I contacted the showâ€™s producers to hear what happened. Earlier today, they said, Rose tripped in a pothole while walking on 59th Street in Manhattan. He was carrying a newly purchased MacBook Air and made a quick (but ultimately flawed) decision while falling: sacrifice the face, protect the computer. â€œIn doing so, he pretty much hit the pavement face first, unfortunately,â€ they said.

Luckily the MacBook Air survived the fall. â€œThe Macbook Air is fine, he showed us the blood stains on it this morning.â€