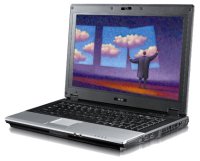 It’s based on the Intel GL960+ICH8-M platform (aka Crestline) and utilizes Intel’s Integrated GMA X3100 graphics core for its graphics chipset.

It weighs in at just under 5 pounds and is just over one inch (26.5mm) thick (not the lightest in its class by a long shot). It has a built-in web camera and dual-layer DVD writer. It comes loaded with Windows Vista Home Premium

Pricing and availability are not available at this.