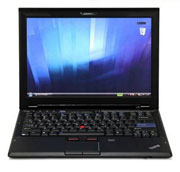 Hothardware has benchmarked the Lenovo ThinkPad X300 against a few other laptops, and one segment focused on the speed of the X300’s 64GB Solid State Drive (SSD).