It would appear that we will soon be seeing full information (and release dates) for the Dell Latitude E series – the Latitude E4200 and Latitude E4300. This, according to an official appearance of the “Laitude E-Family Laptops!” on Dell.com.

The E4300 will probably have a 13.3-inch display and possibly be a replacement for the Latitude D430 (which, while the D430 has a smaller display, the e4300 actually weighs less).

Both should have DisplayPort (an upgrade for video connections), eSATA, and should be based on Intel’s Centrino 2 platform.

Engadget believes that based on the appearance at Dell.com, that there will be an official announcement sometime in the next five weeks . 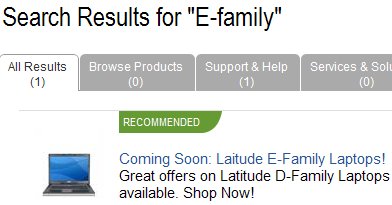 Read:
– Search at Dell.com
– Via Engadget