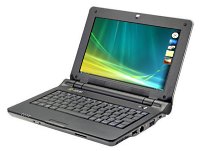 PC Advisor is reporting that Everex is planning an even larger netbook / sub-notebook type of device, sometime in November of this year, with a 10.2-inch display.

In addition, they maybe accelerating the release of their 8.9-inch Everex Cloudbook Max to the end of August for Japan and Taiwan, and September for the US (instead of later in the year as originally reported), with a WiMax-version due in September.

The 3G options (HSDPA and HSUPA) leave the “mini-laptop” open to bundling with a 3G contract (and perhaps a cheaper price up front).

The information is said to come from First International Computer (FIC), who manufacturers the 7-inch Everex CloudBook and one curious note is that instead of strictly staying with a VIA C7-M 1.6GHz CPU, Everex has opted for a 1.6GHz Intel Atom CPU as well, with a slower VIA CPU.