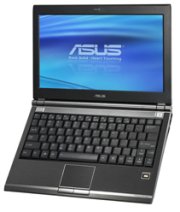 ASUSTek Computer Inc announced that that a solid state drive (SSD) version of their 11.1-inch Asus U2E will be available in Japan on July 12 for 1770â‚¬ (around $2770). There is already an SSD version available in North America.

This U2E will have 2GB of memory, Bluetooth 2.0, fingerprint reader, the afore-mentioned 32GB SSD, and it’s powered by an ultra low voltage (ULV) Intel Core 2 Duo U7600 running at 1.2GHz.

I’m kind of surprised that it’s just 32GB, given the recent price drops, but this could be literally a case a device already in production after the price drops started (the Apple MacBook Air recently dropped $500 or so in price for the SSD versions).