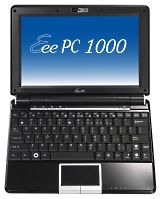 Last week, I menioned that Asus EEE PC 900As were showing up at Best Buy. Yesterday, I was at another store, and they were preparing to put a Eee PC 900A on display as well.

Keep in mind that these appear to be special versions for Best Buy – they don’t have webcams and the storage is different than what you see elsewhere (for instance, the 1000HD you see at Amazon has a smaller HDD, but does have a webcam – the Best Buy version doesn’t have a webcam). As far as I know it has the same 6-cell battery that other 1000HDs have, but I will be investigating this myself.

I’ve included an image of the ad as well as specifications below (click “Read More” if you don’t see it) and links to check your store availability.