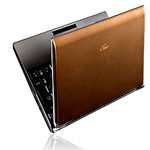 A couple of hands-on articles about the upcoming 10.2″ Asus Eee PC S101 have been posted on Engadget, Gizmodo, and LAPTOP Magazine (who also posted a fairly in-depth video hands-on). They were able to take a look what appears to be a production S101 at a launch event put together by Asus.

Speaking of launches:
Official US launch: $699 on November 1st

Joanna Stern of LAPTOP Magazine handled their hands-on, and showed off the touchpad which was larger than the touchpad on most netbooks. It also has multi-touch functionality (other netbooks have it, but the implementation depends on the manufacturer). She felt the LED-backlit display was of a higher quality than most other 10.2″ netbooks in the S101’s class. When I say class, I mean display-size class. The S101 is in its own class when it comes to price and design (that should change when the Asus N10 becomes available).