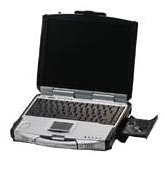 Note: At this time (March 21, 2007), this appears related to the Motorola MW810. We will update this page as more details become available.

Connectivity: – up to four radios including 802.11a/b/g, Bluetooth, GPS, and WAN

Other:
* ML910 built and tested to United States Department of Defense standard MIL-STD-810F
* ML910 has a hard drive heater for operation in freezing temperatures, plus internal monitoring to prevent problems with extreme heat or cold.