Netbooks (SL Netbook Listing)
A “netbook” is kind of a new trend in the mobile computing industry. This segment consists of low-budget, small laptops (displays of 10-inches or smaller), that mirror larger laptops in many ways (physical keyboards, expandable storage, etc.). The Asus Eee PC pretty much created the netbook market. Most of them offer either Linux or Microsoft Windows XP (some support Windows Vista). Some in the industry are now referring to these types of laptops as “Small, Cheap Computers” or SCCs.

Subnotebooks (SL Subnotebook Listing)
“Subnotebooks“, in our opinion, start with 10-inch displays and go down to 4 – 5-inch displays, and have been around for quite a long time – Recent examples include the 8.9-inch Fujitsu LifeBook P1620 and its predecessors, or the 7-inch Toshiba Libretto U100. Unlike netbooks, in many instances, subnotebooks crammed in higher-resolution displays, as well as used CPUs found in larger laptops. The much-higher price usually reflected that. 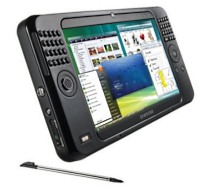 UMPCs
UMPCs, aka Ultra-Mobile PCs (and originally known as “Project Origami”). Intitially the Asus Eee PC was lumped into this category (and indeed, the early versions of the Eee PC may have been more UMPC than netbook). Almost all of these feature a touch-senstive screen and/or function as a smaller version of a Tablet PC. They also (usually) run full Tablet versions of Microsoft Windows XP or Vista (not surprising given that Microsoft was behind “Project Origami”). Input is usually through pen or touch-based input and a small number of keys (function keys, mouse-like inputs), including a virtual keyboard overlaid on the display.

One Laptop Per Child / Classmate PC
Of course, there is the One Laptop per Child project (Wikipedia), and it goes back to 2005, however while the OLPC shares some characteristics with netbooks (and could fall under subnotebooks), it is meant for a very specific market (along with the Classmate PC) and has very limited hardware specifications that reflect that. The Classmate PC, at the beginning of April, 2008, received a substantial update, and more closely resembles other netbooks. We’ve held off discussing both of these devices namely because they are such a limited market.

In summary, we could say almost all netbooks are subnotebooks, but not all subnotebooks are netbooks, and while some netbooks could fall into the UMPC category, most won’t.