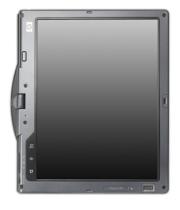 Craig Pringle has one of the first reviews of the HP Compaq tc4400 Tablet PC, which was just announced this week. The tc4400 is what I call a “convertible” and what some call a hybrid – it’s a Tablet PC with a physical keyboard that can convert to a notebook form factor. It’s powered by Intel’s Core Duo CPU and has a 12-inch non-widescreen display.

He’s posted a couple of hints on his blog but still kept it fairly secret, that he’s been working with a pre-production model of the tc4400 for several weeks now. He was able to keep it fairly secret because, in his own words, it was greatly helped by the fact that the TC4400 is, well, not all that exciting really. While it has some good features and some points that need improvement there is nothing in particular that Iâ€™ve been dying to share.

He notes that at the same price point, he’d take the Toshiba M400 over the tc4400. It’s a good hands-on review, and probably the first.

This entry was posted in HP/Compaq, Reviews, Tablets. Bookmark the permalink.