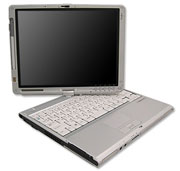 If you are thinking about picking up a newer Tablet PC or one of the laptop convertibles – laptops that can convert between laptop and Tablet PC formats, such as the ThinkPad X61 Tablet, Fujitsu LifeBook T8240 or Dell’s Latitude XT when it rolls out), you may want to view this video on YouTube. It’s from Paul Hoover and is a five and a half minute rundown of Tablet PC-specific features in Windows Vista.

The “panning” feature in Windows and Internet Explorer was very interesting, and one of the first things I noticed that really set it apart from previous Microsoft Tablet PC offerings – it’s a more “natural” way of navigating pages with a pen/stylus.

This entry was posted in Articles, OS - Vista, Tablets. Bookmark the permalink.