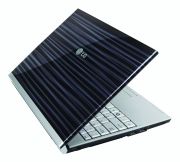 The LG P300 (or LG XNOTE P300) is apparently showing up in Europe (it debuted in Korea at the end of last year). Some have seen this 13.3″ LED-backlit widescreen ultraportable as a possible competitor to Dell’s XPS M1330 or possibly even the Apple MacBook Air – it does weigh in at just 3.5 pounds (and more importantly, the DVD Writer is an external USB device, which, like the MacBook Air, is powered over the USB bus).

That may seem a little heavy to be saying it’s an ultraportable, but for the European launch, they’ve added an Intel Core 2 Duo Penryn option – the T8300 (2.4GHz, 3MB L2 Cache, 800MHz FSB). Pretty impressive.

In addition to the afore-mentioned display, it has an HDMI out, and the graphics are driven either by an NVIDIA 8400GM or 8600GM dedicated chipset (with 128MB or 256MB dedicated memory). It’s a little pricey – it starts at around $2300 USD and goes up (expect pricing depending on region).

No word on when/if it will reach the United States. So far it’s available in parts of the Middle East, Asia, and now Europe.