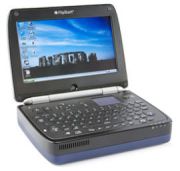 Engadget is reporting on something rather interesting concerning the 5.6-inch ultra low voltage Vulcan FlipStart (or Vulcan FlipStart 1.0 as they were calling it). Not much has been heard out of this company since the influx of ultraportable and ultra-cheap “netbooks or “subnotebooks” that flooded the market since the beginning of the year. These devices would have heavily impacted the FlipStart – originally it was slated to sell for upwards of $1500 – $1999 and by January of 2008 had dropped to $600.

Now when you visit the product page, you are greeted with a rather interesting message that implies they aren’t going to be produced anymore (at least the 1.0 version):

The stock of FlipStart has been sold out.

FlipStart accessories such as batteries, power supplies, cases etc. can be purchased through Dynamism at Dynamism.com .