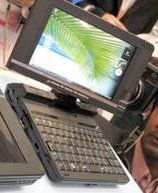 Following several weeks where it seemed like the Fujitsu U810 / U1010 was being discontinued (which it turns out it was), the sequel to the 5.6-inch “convertible” (touchscreen that rotates and folds down to form a tablet) UMPC/netbook has been announced. It’s referred to, at least in Asian markets, as the Fujitsu U2010 (which could mean it will be branded the U820 or U910 in the US).

Not much else is known at this time. It’s clearly not going to be competing with the netbook / sub-notebook style devices because of the price.