When Asus began selling the Eee PC line of netbooks/sub-notebooks, whatever you prefer to call them, they (and later Acer and MSI) seemed to have problems defining who they were for, or at least the message wasn’t clear. It wasn’t helped by the fact that Best Buy and other physical retailers (along with the online retailers) weren’t sure where they fit into the laptop family. Many of us had no problem defining where they fit in – basic internet use and mainly as a second machine.

That’s been changing over the past several months. I saw this in action twice today.

The first was at Office Max – they had an 8.9 Acer Aspire One AOA150-1635 on display, along with a placard below it describing why you would buy this. Their message for who should buy this and why is quoted directly below (as you can see from the photo below this):
Why Buy:
* Netbooks may look like regular laptops, but they do not have the full capabilities of one.
* Great for basic tasks such as email and internet use or a secondary unit.
* Netbooks are light weight and great for mobility at a great price. 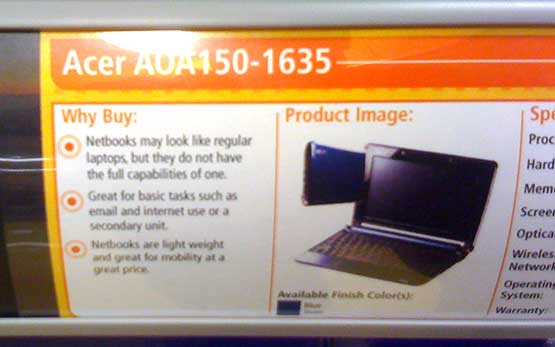 Costco had a rather prominent large and prominently placed display – an endcap, that was selling a 10.2″ HP Mini 1033CL from the HP Mini 1000 line for consumers. Their description was “Take Me With You” and “The small, light mobile companion keeps your friends, family, social networks, and websites close – wherever you go.”

They then included a large comparison titled “IS A NETBOOK RIGHT FOR ME?” with a point-by-point comparison between the “HP Mini 1033CL Netbook” and a “Typical notebook” (typical = 14″ display, 5+ pounds, 2GB RAM, 250GB+ drive space, optical drive, etc.). 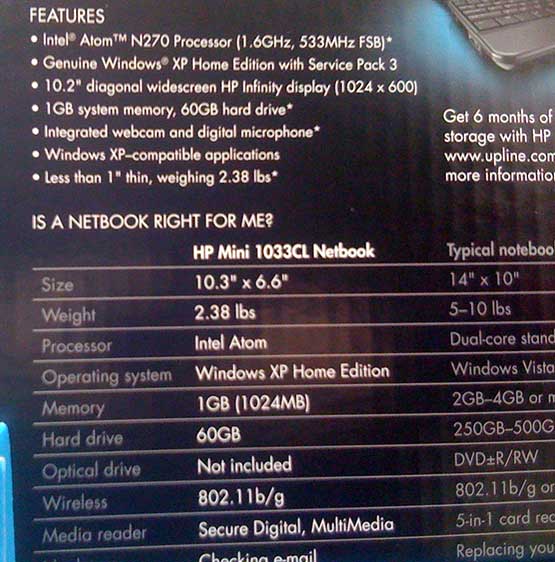 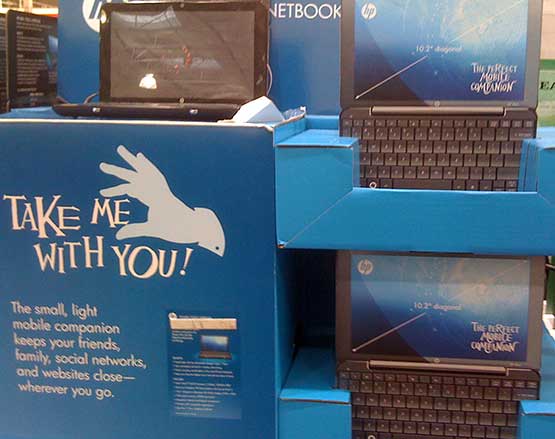 While the manufacturers and retailers had a few issues at first on how to market these, it’s good to see that they are making it clear exactly who these are (or at least what situations they are good for) for and what they are capable of doing. It’s taken a while, but it looks like the marketing and advertising is finally catching up. By the way, while looking at the HP display, quite a few people were interested in them, just in the few minutes I was there.

Apologies for the picture quality – the lighting was not that great and the photos were taken on a whim.