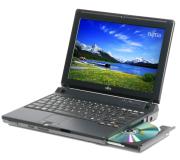 I received a notice from Fujitsu yesterday that we are fast approaching the point where you won’t be able to buy some Fujitsu laptops and Tablet PC/convertibles with Microsoft Windows XP anymore.

On a sidenote, and it’s unrelated to Fujitsu dropping Windows XP from these models, from the online retailers that I looked at, these particular models could be reaching End-Of-Life (EOL) status. All three have pretty steep discounts (the T2010 can be found at Amazon.com for $1383 for instance, which is several hundred dollars off the original price).