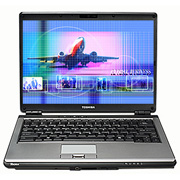 Jerry Jackson at NotebookReview.com has reviewed the Toshiba Tecra M8, Toshiba’s replacement for the Tecra M6, and with it’s 13.3″ display and design, the M8 is related to the Toshiba Satellite U300 series (The U300 / U305 machines are targeted towards consumers, the M8 towards business users). The Tecra M8 was announced only a few months ago, and this is one of the first reviews.

It’s based on Intel’s Santa Rosa platform and is powered by the Intel Core 2 Duo T7x00 CPU series, with the graphics processing provided by Intel’s Graphics Media Accelerator X3100.

Even though the official site lists the Tecra M8 as maxing out at 2GB of memory, they confirmed that it will in fact handle 4GB of memory.

Once again, they mentioned a problem that seems to be popping up a lot lately (although mostly with Sony) – too much bloatware.