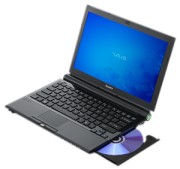 Kevin O’Brien over at NotebookReview.com has posted his “First Thoughts” about the Sony VAIO TZ series (specifically the VGN-TZ190N), Sony’s latest ultraportable flagship line, with an 11.1″ widescreen, LED Backlit display. The TZ series weighs in at around 2.6 pounds with a standard battery. Unlike many in this size, it does include an internal optical drive.

The combination of an Ultra Low Voltage CPU, LED Backlit-display, and a Solid State Drive (flash memory-based drive) give it boost in battery life for a laptop this small.

Kevin was very impressed with the LED backlighting, saying Colors were magnificent making tasks ranging from typing a report or watching a movie pleasant on the eyes. The white color displayed on the screen from the LED backlighting had only a hint of blue, and was the closest to true white I have ever seen on a LCD before. The backlighting was very even across the entire screen and stayed consistent even as brightness was lowered for power conservation.

They had some problems with this pre-production model and will be posting a full review when a new unit arrives.