Over the past few days, Samsung has been hosting their European Forum in Vienna. TechRadar UK got a chance to speak with Kyu Uhm, head of Samsung’s Worldwide Sales and Marketing (Computing Division).

Uhm had quite a bit to say about Microsoft’s upcoming Windows 7, as well as netbooks in general. As far as what version of Windows 7 would be shipped with future Samsung ultraportable products, it comes down to “…how much we need to pay to Microsoft. It is an open issue. So we can ship other Windows 7 versions, but it is a matter of royalties.”

Uhm considers the Samsung NC10 to be “key drivers for Samsung’s growth in the short term period,“, which echoes what analysts have been saying.

Intel Gets Aggressive with CULV

DigiTimes is reporting that Intel is getting extremely aggressive in promoting the upcoming CULV platform. CULV – Consumer Ultra Low Voltage, is expected to shake up the ultraportable laptop/notebook market.

Up until now, typical Ultra Low Voltage (ULV) laptops were fairly pricey – normally starting at well over $1000 (although that’s changed in recent months). With the introduction of the CULV platform, Intel plans to change that. They will be offering deep discounts, as low as $65 per unit for HP, Acer, and Dell, with $70-$75 USD for Asustek and MSI, according to DigiTimes’ sources. The lowest tier is probably Celeron-based, as dual-core mid-range and high-end CPUs are being listed at over $300 USD.

MSI’s 13.3-inch X-Slim X340 will be one of the first ultraportables based on the CULV platform and is expected to start somewhere between $700 and $1000.

Netbooks/sub-notebooks revealed that there is a huge market for small/ultraportable laptops at a lower price than traditional laptops. Intel would probably rather sell CULV CPUs than their Atom CPUs that are found in most netbooks, since the price-per-unit for the CULVs is substantially higher. This will be an interesting launch to watch.

Posted in Articles, Intel, News | Comments Off on Intel Gets Aggressive with CULV

This week, there have been a few decent deals on netbooks as well as laptops, including a refurbished HP Mini 1030NR for $279. 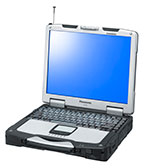 Engadget has posted a review/comparison of the current rugged Intel Centrino 2-based 13.3″ Panasonic ToughBook 30 versus the semi-rugged 15.4″ GammaTech Durabook D15RP. The ToughBook 30 isn’t exactly ultraportable – it weighs in at over 8 pounds, however it’s one of the most rugged/durable in its class, if not the most rugged/durable. Both of these meet MIL-STD-810F specifications, which is a set of standards put out by the US Army to test just how rugged certain devices are within certain environmental/field conditions (heat, cold, drop-tests, dust-proof, liquids, etc.).

It’s a unique comparison – the Toughbook has a lower-voltage SL9300 Intel Core 2 Duo, versus the Durabook’s Intel T8300 (faster/higher voltage), as well as the displays – the Panasonic’s is one of the few 13.3-inch displays using a non-widescreen XGA resolution (1024×768) while the GammaTech has a 15.4-inch 1280×800. In the Toughbook’s defense, it does have a touchscreen display

The review is worth it just to watch the videos of both being put through their paces – drop tests (to test the cases as well as seeing just how shock/drop-proof the HDD setups are) as well as the reviewer physically standing on them and pouring water on them.

On Sunday, Brad at liliputing published his review of the professional/business-oriented 10.1-inch HP Mini 2140 netbook.

HP has included better webcam software than most manufacturers, including the ability to record audio-only, as well as controlling the webcam itself (resolution, zoom, backlight levels, output format).

With the default 3-cell 28WHr battery, he was able to get longer battery performance than the HP Mini 1000, although he noted that there is a 6-cell 55WHr battery available.

He points out the appeal of the 2140:
– Sturdier magnesium alloy case/chassis
– spill-resistant keyboard
– Accelerometer to protect the HDD in case of a drop/bump
– ExpressCard slot (something that few netbooks have outside of Lenovo’s S10)
– The upcoming 1366×768 HD-capable display (available in April)